Overall a great product! This case looks amazing on the new 11 Mac Pro! I have owned a Rokform for every phone I own! A little disappointed that you don’t get the lanyard with the case anymore. Have always received one with every case. Never the less I have ordered one. Keep the products coming! 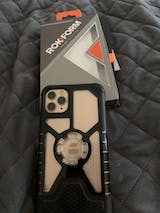 B
B.D.
Love the case

Case fits perfectly, a little tough to remove when needed though.

I recently traded up my iPhone 6 Plus for an iPhone 11 Pro Max. My old phone survived 5 years of abuse through drops, scrapes, and falls with no issues because I opted for a Rok Form case. You can bet my first purchase for my new phone was another Rok Form case. I was happy to see it provides the same protection as the old one while stepping up fit and finish. Only one word to describe these case - SUPERB.

Great case! Love the look and love the way it clips onto my bike.

The quality of the case is very good. The case I originally received was slightly defective in the charging port/ speaker area. I emailed them and had a response within 30 minutes. I was told to call them and when I called they said they were shipping a replacement. Just verifying my address. Quality and great customer service.

Shady,
Helped me, she has helped me in the past multiple times, and I always get excellent service. My only recommendation would be to had some colors for girls. My wife would like a pink or powder blue or even just a clear case. She says the black is just too manly, but she loves the magnets.