Low profile design blends in with controls and looks great with or without a phone installed on your motorcycle.

Fast, easy, and secure installation to most sportbike center stems. Simply choose from one of the two included expansion grips (large or small), insert into the stem hole, and tighten the center screw with the supplied wrench. Voila, the perfect phone mount holder, just where you want it!

Never miss a turn call or text. View your GPS Maps, incoming calls, texts, travel apps like Rever, and more. Now you have your phone where you need it most, out of your hands and in plain sight.

Sturdy construction is what you want when you are trying to keep your $1,000.00+ phone safe. The Rokform Pro Series Stem mount is made to hold your phone securely even over the roughest terrain. It will keep going even when you transfer it to your new bike. All aluminum construction means there is no plastic to break and or degrade from the sun, and it will probably be the last phone mount motorcycle holder for your sportbike that you will ever need to buy.

The Rokform stem mount blends perfectly into the bike's controls and looks great with or without a phone mounted to it.

The Rokform Pro Series stem mount phone holder is designed to work with any Rokform case for the Apple iPhone or Samsung Galaxy. If you don't have one of our cases or one of those phones, try our universal adapter that can be applied directly to almost any phone or case.

Fitment is easy on most motorcycle stems but some stems and triple clamps may have a cover or step which will not allow our mount to be installed properly. If you have questions on fitment and or installation we are happy to help, toll free. 1-855-765-3676

Order absolutely risk-free with our 2-year warranty and 60-day money-back guarantee. Have questions, or need help? Try calling our award-winning five-star customer service team at 1-855-765-3676. Not only are they knowledgeable, but they are friendly, fun, and look forward to hearing from you!

PERFECT!! That is really all I need to write!!

I have mine mounted on a Honda VFR800 I use to commute to various locations around the city is Sydney, Australia. I would usually have my iPhone 12Pro Max stored in the top of my tank bag..... but either the phone would slide around and then be diagonal in the bag, or the scream would touch the too plastic cover of the tank bag and maps would Re centre somewhere else.

This SUPER STURDY mount is the the main reason I switched to an entire new ecosystem of mounts and covers. ROKFORM has not let me down!!

I had been with the other company for some 10 years. Rokform has completely revamped the the secure motorcycle mount.

I travel on freeways at 110km/h and the mount doesn't miss a beat. The bumpy roads around Sydney shake the bike but not the phone. With the aid of the magnets in the case, Secure is an understatement!!

The mount angles up nicely to allow you to view your choice of navigation system, messages and calls (not that I can answer them with my choice of helmet). This is with a tank bag on the tank. I can still see all of my motorcycle's dash cluster. And the ignition is still way enough to access to put the key in and turn even with winter gloves on.

Top effort Rokform!! I'm super Happy to have you onboard!!

J
Jay
Buy it for life

Unless it's somehow damaged in a crash, it will go from bike to bike to bike to... crisp and accurate machining..artwork really. Quality to the touch, it's nice to hold and look at. Like when ya wanna caress a nice smooth piece of engineering. And I'm reminded of that every time I slot my phone into it. Which in itself is part joy and part something else.

You see, the mount is the kind of sturdy that feels built into the bike by OEM. It's that solid. The RAM mount it replaces rotated freely and could be plucked from the bike with a tug. This rokform doesn't move. It isn't going anywhere. So that's the joy part.

The something else is the magnet. Not annoying but demands technique to mount ur phone quickly. And when you master it, ur thankful for the grip it's got on ur device. The magnet is very strong and wants to link up to the mount immediately, tugging the phone from ur hand! You must orient the phone to a 90* angle b4 going anywhere near the mount. Then line up the opening on ur phone to the mount, then turn until the cutouts lock into place.Then you have to squeeze that last little bit cuz, again, the magnet is so strong you have to rotate past it's force to fully engage the mount. Absolute CLAMP!

Removal has been a two-handed affair. Which I like. That magnet even serves as a way to slap my phone up against the gym equipment during sets.

And then you get a cute lil lanyard just in case. It may sound useless in the face of such a strong mount, but in the worst case scenario, your phone has a better chance of stayin with the bike if the mount ends up eating pavement. 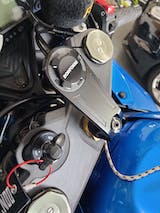 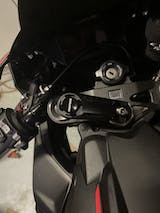 This mount fits my Aprilia RS 660 perfectly. The iPhone case and this mount are extremely solid. There’s no way it’s falling off…no way at all!

Kinda cheesy title. But this is seriously the best system I've come across. The phone case is low profile and I've been trying to find as many surfaces as I can to stick the case magnet too. The motorcycle Handlebar mount is absolutely solid. I was worried that my big phone would hit the tank if I turn the handlebars, but nope, works just fine.

Absolutely love this set up

So, I wasn’t sure that I would like the combo I purchased especially the mount. Took a few mins to figure out. Once I was able to get it mounted, it did not take very long for me to realize how good the product was/is. Much better than my previous mount. Completely satisfied. Definitely takes some force to have my phone to come dislodged from the mount, one heck of a strong magnet indeed. Thanks Rokform! Oh the wallet and case lets just say, great combo for going out or to the gym. The wallet slides a bit from the case although manageable. Would like the wallet to stay in place more than it does. Tends to spin and move around more than I like.

Two days after purchasing my stem mount rokform, I hit a bad patch of gravel and went down pretty hard. My rokform didn't budge at all. Great product and moderately easy installation

I
Ike W.
The best u can get

I feel like in life there’s some things u should pay more for better quality and some things u cheap out on. Are phones are one of the most important things in our day to day. It would be a shame to be going 120 and ur phone fall off. The case with the mount is awesome the case is great to cuz it has a magnet build in. Which is awesome for me because am a mechanic so everything I work around is metal. I’ve already dropped my phone 50 times since I’ve got this case holds up great. I trust this product every time I hop on my R6.